This begins a series of circuit analysis emails that focuses on the ground side of the circuit with a total of 9 articles. This is Part 1 with 8 more articles to follow until we have the subject of electron current through the ground circuit fully covered.

There is a lot of misunderstanding about ground circuits in automobiles, trucks and heavy equipment. Let’s clear up the misunderstanding caused by teaching positive current flow in circuits. Positive current flow states that current flows from the positive (+) terminal to the negative (-) terminal to explain how circuits work. Since the positive post of the battery is the one that causes sparks when it contacts ground, technicians assume that is where the “juice” is. They note that if you ground the negative post of the battery it doesn’t cause sparks to fly because there is no “juice” there. Just the opposite of what is true due to misunderstanding.

When the ground side of the circuit develops a bad connection due to corrosion, a voltage appears on the ground side of the circuit. I have heard technicians ask: “How does voltage feeds back into ground?” It is clear that positive current flow doesn’t explain how circuits really work. And it certainly doesn’t answer the question of how “voltage feeds back into ground” which it doesn’t although it appears that it does due to misunderstanding.

The solution is to understand the ground circuit and how electron flow occurs in a circuit requires electron flow (-) to (+). Electrons are negative charges. A large number of electrons accumulate in the negative terminal of the battery producing a negative (-) charge. The battery negative terminal is labeled -BATT (say minus BATT) or B- (say B minus). The minus sign indicates a negative charge because all the electrons have been accumulated there. The positive side of the battery, labeled +BATT (say plus BATT) or B+ (say B plus), is marked with a ”+” sign since it is positive, the opposite of the negative side. This indicates there are much fewer electrons at the positive terminal than at the negative terminal. The difference between the two battery terminals is referred to as battery voltage. 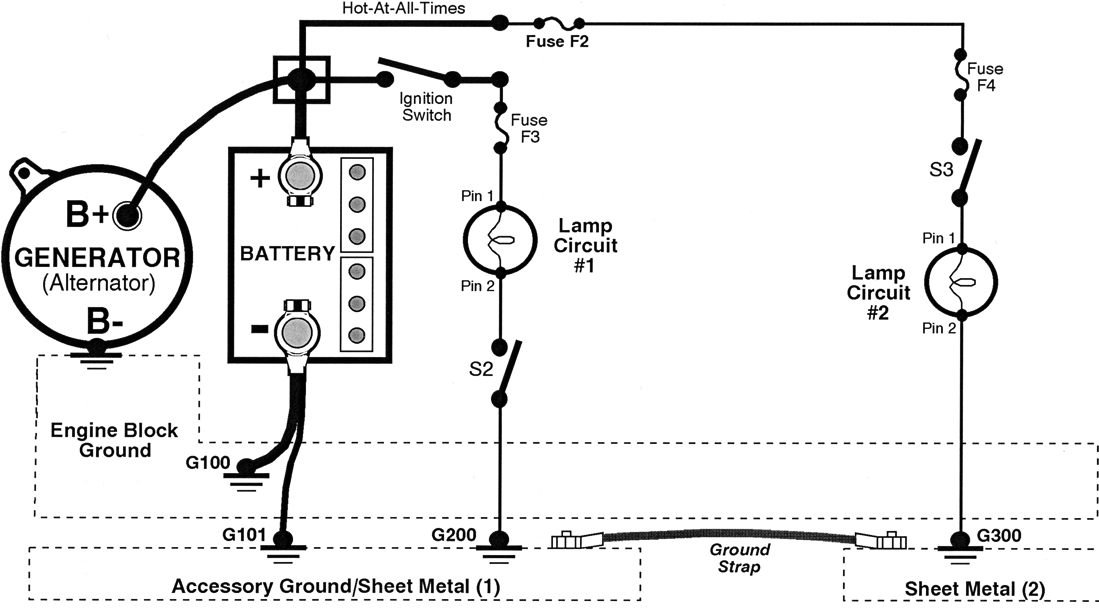 The schematic diagram above is a simple vehicle electrical circuit including the ground circuit shown in detail. Several circuit components are connected together to form a complete vehicle electrical circuit containing a typical vehicle voltage source (battery and generator) and an ignition switch to control the voltage applied to vehicle circuits. Notice that Lamp Circuit #2 is connected to Hot-At-All-Times B+ which is a direct connection to B+ supply. Lamp circuit #2 will operate any time switch S3 is closed regardless if the Ignition Switch is ON (closed) or OFF (open). Lamp circuit #1 can only operate when the ignition switch is CLOSED and switch S2 is CLOSED.

A second cable is called the accessory ground or sheet metal ground and is connected by a cable from -BATT to sheet metal (1). A ground strap connects sheet metal (1) to sheet metal (2) which completes the ground circuit.  In the next article we will begin to discuss how electron current flows through the circuit.

You may be surprised how this series of articles will reveal some things about circuits that you probably never heard or knew before.